Burgers. Fries. Milkshakes. They aren’t part of my normal diet, maybe something I have two or three times a year. But a Neil Perry burger for under $10? I’m going to take part in that. Also, Google Maps kindly informs me that it is 1.6km from my office and I figure the 3.2km round trip will offset it, well partially anyway. It has only been open 5 days when I get there and a plethora of other food bloggers (we are cyberfriends, one day we really should meet in person!) have already been. Feedback has been mixed, and despite Neil’s very hands on best efforts, there have been a few teething issues. Today, for example, there were no wings, and that was one of the things I really wanted to try. I wondered how they could be sold out of wings already at 12.30pm, but apparently none at all had arrived that day. “No shipment” we were advised.

The queue was long, but not horrendous, and it moved reasonably quickly.

Its a simple and efficient ordering process, take a buzzer and take a seat if you’re eating in. There’s a good amount of seating, indoors and out.

We tried the cheese burger which contained grass fed beef, cheese, onion, pickles, tomato, lettuce and “secret sauce. For $8.90, I thought it was pretty good. My beef was well flavoured, the burger held together well, and unlike a lot of the brioche burger buns around these days, it didn’t taste like it was full of sugar. 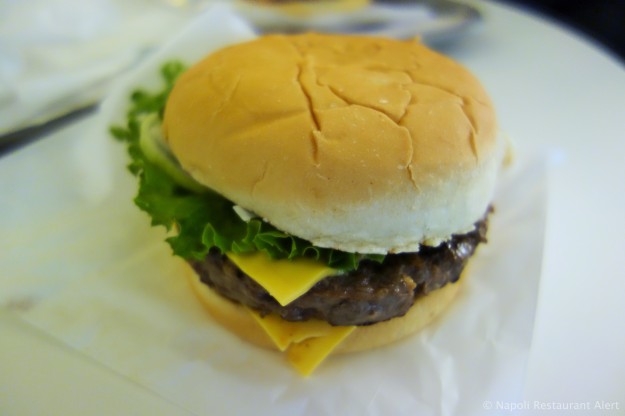 The pork burger had pork belly, salted chilli, pickles, pickled slaw, and lettuce. There wasn’t enough pork on this in my view and you didn’t get enough of a taste of it.

The chips were crispy and easy to eat. The salted dulce de leche milkshake was disappointing though, it just tasted like watery milk with a hint of flavour, I had hoped it would be more pronounced being a big d.d.l fan.

Versus other burgers I have tried in the last couple of years – it was certainly better than Parlour Burger, and I thought Chur was overhyped. I did recently have a good cheeseburger at Bowery Lane which comes with chips and is sit down table service for only a few dollars more.

So I think yes, there are a few teething issues but that it will come together in time. Mr Perry isn’t one to do things by halves and he will listen to feedback. And hey, this is a “project” right? It takes time to get them just right.