I have to say it was with some trepidation that I entered the doors of Marque. Some of you reading this will remember a dinner a few years ago where we were presented with a deep fried pigeon’s head, beak, eyes, and all, with some rocket leaves on a plate.  It was quite affronting and I think I never quite recovered. I found the food to be tricked-up-try-too-hard food. But hey, every one deserves a second chance. On Fridays they have the three course Prix Fixe menu for $45 which sounded like good value. As I discovered you also get an Amuse Bouche and a ‘post dessert’, which makes it even better.

I was somewhat surprised to see the former sparky Mark Best there himself rustling up the meals with his team. These days the big names behind all the hatted restaurants often aren’t, too busy on Masterchef and doing soup commercials and what have you.

With the image of that pigeon’s head still in my mind, I crossed my fingers and hoped for the best.To start, an Amuse Bouche of a tomato gazpacho with a tomato paper.  Light and refreshing and a great way to start on a summer’s day.

Next, chicken, oyster and cress. The chicken really was delicious, as was the paper thin crispy skin. But underneath was a green sauce that you can’t see in the photo, think made from cress, it really didn’t add anything to the dish and the flavour was unremarkable.

Then grilled swordfish with beetroot, blackcurrent and juniper. It was such a pretty dish and I loved the beetroot foam. However the sliced vegetables where a little too crunchy for me, and overall I was neutral on this one.

Then hazelnut mousse with poached apricot, olive and thyme, beautifully presented. The mousse was rich and decadent, offsetting nicely with crunch of the chopped nuts and the fresh sweetness of the apricot. Dish of the day. Skip the olive and thyme though, didn’t like it. It needed some other texture, like a firm champagne jelly or something.

And finally a little extra, a custard with sauterne syrup on top. Yum, I adore a good custard, and this one was among the best.  Also very rich and the small serve was just right.

The food is all pretty as a picture, but if the aim of the Marquevalue Menu is to entice you into coming back for the whole shebang Big Night Out $160 degustation, it doesn’t quite get there. For now, this place stays on my Overrated List. But if you really want to try a Three Hat awarded restaurant and not sting your wallet, the Fix Prixe is the way to do it. 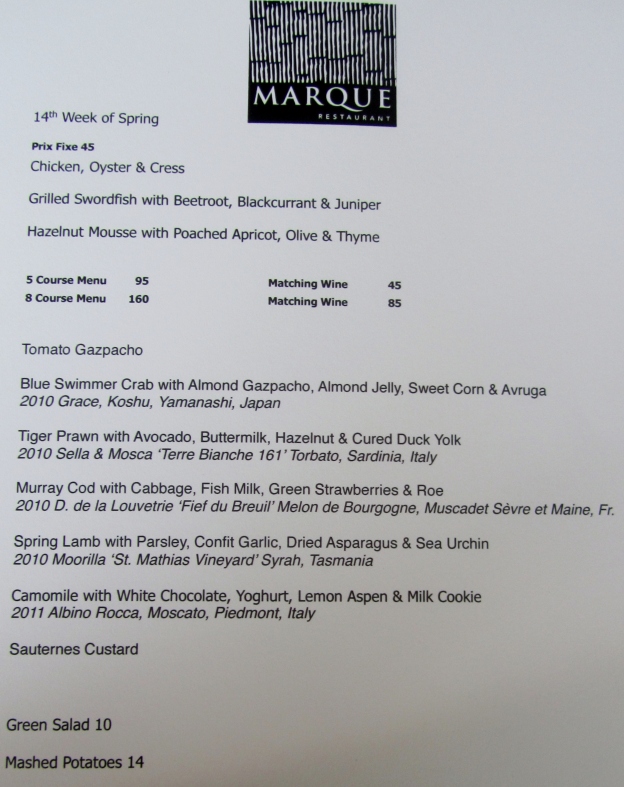